skip to main | skip to sidebar

Matt Harmon gives a heads-up about a wide-margin Nestle-Aland 27 on the market. (Also, there will be a wide-margin BHS.) Pretty cool.

This reminds me of my beloved wide-margin NA25. It came in a blue, cloth-texture hardcover edition. I took it to a binder in Glendale, and had it bound in brown leather. 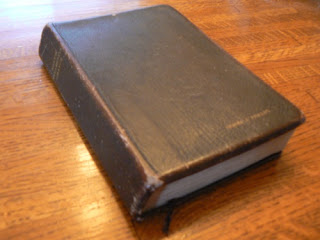 It was a pretty tough NT. I took it with me on trips, hiking, sightseeing—everywhere.

When I lived in Buena Park, sometimes I would cross the street to a Carl's in the morning. I'd take my Greek NT, get some coffee, and just read before my roommate got up.

Once I did this, then came home. After a few moments, I realized my NT was missing. So I raced back to the Carl's to see if they'd found it.

When the young man came up to take my order, I said, "I was in here earlier. Did someone find a brown, leather-bound Greek New Testament."

His look of utter incomprehension was eloquent. In addition—how to say this delicately?—I do not think English was his native language. 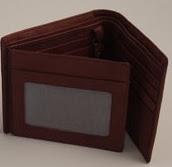 Helpfully, he asked, "A wallet?"

Thankfully we were both rescued by a manager who retrieved the lost item. 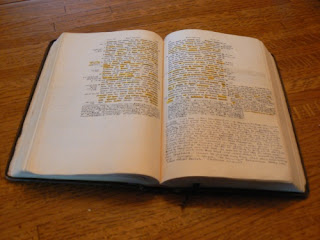 Wow, beautiful pictures, mate—especially that last one, with all that generous margin space just waiting to be written in! Is that your NA25?

Anyhow, sorry to be a smart aleck, but in the interests of promoting simple communication, couldn't you have just asked the waiter if someone had found a brown book? Then, optionally, after it'd been found, you could get into a discussion with him about how it's the Book....

I am sure your question sounded like Greek to him anyhow! :-)

Well, I guess at the time I thought more info would be helpful. It wasn't just a brown book, it was leather. And if they'd opened it, they'd've noticed it wasn't in English. I probably thought I'd be making it simpler by giving more information.

To see the Greek properly, you will need to use either FireFox, Opera, or Internet Explorer 7. If you use an IE enhancement such as Maxthon, you'll need IE7 installed. Otherwise, you'll see boxes in the place of some Greek letters.